The Kanonkop Estate is situated on the lower slopes of the Simonsberg Mountain in the Stellenbosch Region of the Cape and consistently boasts some of South Africa’s most famous premium wines. A fourth generation family estate, Kanonkop was originally purchased by JW Sauer, a cabinet member in the parliament of the Union of South Africa and the estate has been handed down from father to son for over 40 years, now residing in the capable hands of its current owners Paul & Johann Krige. 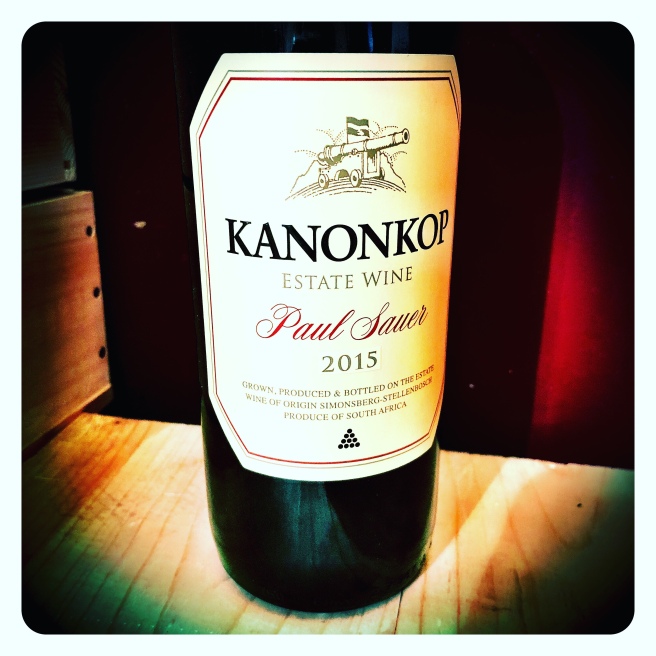 The name Kanonkop was derived from a kopje (hillock), from which a cannon was fired in the 17th Century to alert farmers in outlying areas that sailing ships plying the waters between Europe and the Far East had entered Table Bay for a stopover at Cape Town. The Estate is situated on 125 hectares, of which 100 hectares are planted with vines. A small quantity of these red grapes are selected for the production of around 7,000 cases of 6 of the Estate’s flagship red Bordeaux blend Paul Sauer, produced by one of South Africa’s most intelligent winemakers, Abrie Beeslaar.

A traditional blend of 70% Cabernet Sauvignon, 15% Merlot and 15% Cabernet Franc, the vines are on average 25 years old grown on decomposed Granite, Hutton and Clovelly soils and usually aged around 24 months in new 225 litre French Nevers oak barrels with medium toast.

The goal with any vintage of Paul Sauer is to find the perfect balance between power and concentration, structure and freshness… allowing a certain amount of tamed accessibility combined with immaculate ageworthy credentials. Indeed, this is the DNA which has allowed a wine like Paul Sauer to become firmly established as one of South Africa’s most respected ‘first growths.’ Given the incredible opulence and concentration of the 2015 vintage, this expression dazzles the senses with the most alluring heady nose of sun dried cherries, black currant pastille sweets, blueberries, plummy hoisin sauce, cedar spice and fragrant violets. There is intensity, an abundance of concentration and impressively integrated wood spice, salted toffee and vanilla pod complexity. The acid-fruit equilibrium is perfectly balanced, wrapped in a velvety cherry kirsch liquor texture and a finely focused blueberry and juniper berry finish. Truly effortless class and so beautifully light on its feet with the most suave, polished tannin symmetry. I cannot think of a better expression of Paul Sauer than this 2015 in the past 25 years of tasting. This is possibly one of the finest South African red wines of my generation. Drink from 2022 to 2055+.

One thought on “The Most Hotly Anticipated Red Wine Release from the 2015 Vintage – Tasting Kanonkop Paul Sauer 2015, South Africa’s Very Own First Growth…”