The brand that is Tesselaarsdal was established in 2015 by long time employee Berene Sauls who started at Hamilton Russell as an au pair originally. With higher vinous aspirations and then valiant  support financially and emotionally from Anthony and Olive Hamilton Russell, Berene was cast adrift to fend for herself in the wide world of fine wine after her first release in 2015. Proudly, one of my claims to fame is that I was the first to taste the maiden release 2015 in January 2016 at breakfast, as you do in the trade, at Hamilton Russell when I was invited over to be the panel chair and guest speaker for the Hemel-en-Aarde Pinot Noir Celebration 2016. 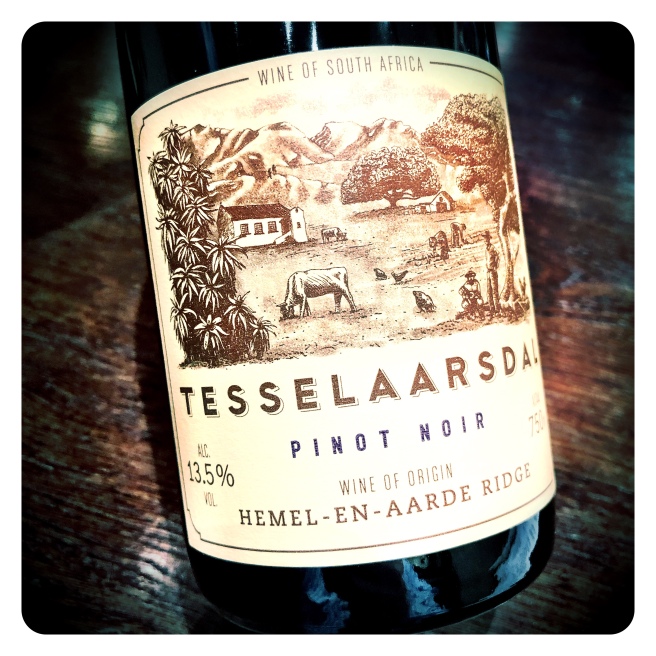 As delicious as it was, the 2015 now starts to pale into insignificance along side newer releases like the 2017 and 2018 vintages. With the 2018 about to land in the UK, I took an opportunity to reacquaint myself with the 2017 that has had a nice amount of time to settle in storage.

A winemaking collaboration hand in hand with Emul Ross, the winemaker at Hamilton Russell, Tesselaarsdal 2017 is made from fruit 100% sourced from a vineyard leased from La Vierge in the Hemel-en-Aarde Ridge from totally unirrigated vineyards. A style of wine that always shows a little bit of sulky reduction early in its evolution, the 2017 seems to have blow most of this off and now starts to up the ante with notes of wild fraises de bois, red bramble berry fruits, freshly cut hedgerow and an interesting melange of sappy red berry fruits, limestone minerality and dried herb spice. On the palate there is a real luminescent brightness, crisp freshness, salinity, and purity of crunchy red berry fruits. Tannins are soft and supple, very elegant as you would expect from the sultry 2017 vintage in Hemel-en-Aarde making the wine very friendly, accessible and opulent already. Ultimately, what I love about this wine is its completeness, its textural harmony, its fruit intensity and of course its saline bite. Only the third vintage, this remains one of my favourite Pinot Noirs produced in South Africa.