The Skerpioen white from Eben Sadie is a field blend of interplanted Chenin Blanc and Palomino vines. These unirrigated old bush vines were planted between the years 1958 to 1967 in extremely chalky soils in one of the coolest locations in the Swartland.

Of all Eben Sadie’s Old Vine Series wines, the Skerpioen white is perhaps the most intriguing, slightly austere in youth, this wine is mineral driven and restrained and often takes a few years to open its shoulders and show it’s hidden depths.

As Christian Eedes from South Africa’s Wine Magazine comments…. “a perplexing wine…” with a minerality and austerity that is often “mesmerising”. Sums this wine up poignantly. 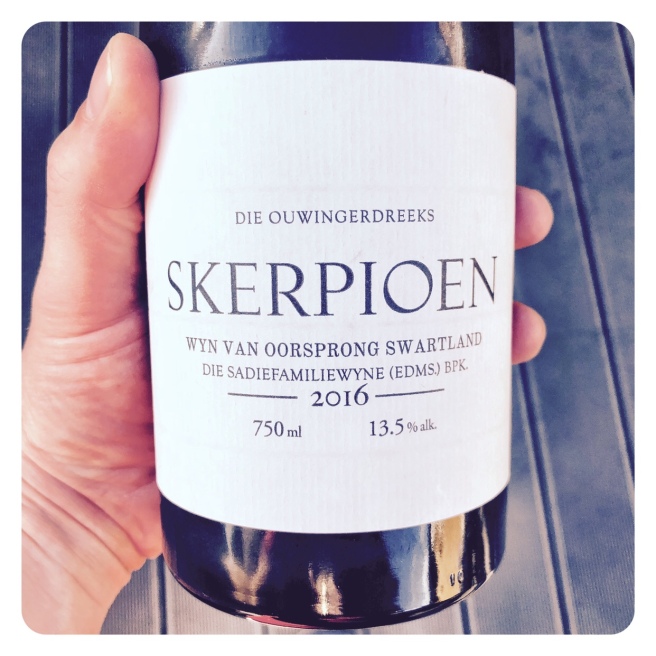 It’s hard not to approach this wine without preconceptions! I was excited just uncorking the wine. But Skerpioen is always a complex and complicated wine to understand and whenever you open a bottle, you never quite know what mood it is going to be in, a little bit like drinking top red Burgundy. The second of the hot, drought vintages, the 2016 is showing a lot more expressive complexity than when I first tasted this wine on release. It still has a pithy nose of lime peel, lemon grass, apple, dried herbs, talc and dusty granite. A little extra time in bottle has allowed this wine to develop subtle notes of white peach, orange blossom, white pear and an alluring grilled herbs and pork fat complexity. Fleshy and textural with perhaps not quite the same depth, power and intensity of the 2015, this wine remains a very finely poised, beautifully balanced and thoroughly delicious release from Eben Sadie. Start drinking now, but no rush as this will evolve for another 10+ years.