I had a wonderful time in Cape Town at Cape Wine 2018 and before that at the Nederburg Auction of older South African wines. Of course Cape Wine 2018 will be remembered for Tim Atkin MW’s first personal 100 point SA wine score, an active debate surrounding scoring and score inflation both in South Africa and globally and also the prickly pear issue of where to price South Africa’s premium wines, many made from old vine heritage vineyards around the Western Cape that are super expensive to farm. Serious questions indeed. 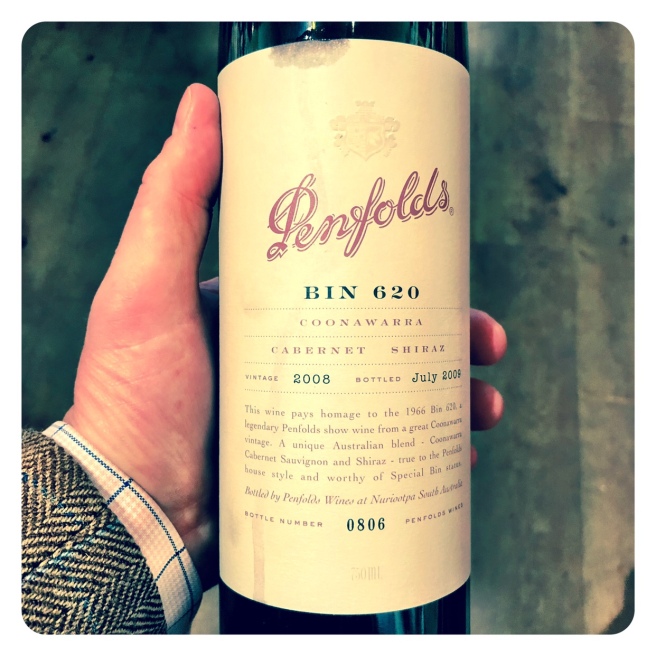 Some of these questions were brought into a new perspective when I returned to my office to find a bottle of Penfold’s Bin 620 Cabernet Shiraz from Coonawarra freshly opened on a colleagues desk courtesy of a private client. This is a Wine Advocate 98/100 point wine as scored by Lisa Perrotti-Brown MW and retails currently in the UK market for £850 per bottle inc taxes (R16,575 pb). So we are talking serious kit here… and amazingly a wine that makes even the Penfold’s Grange look positively cheap!

Tasting the wine, it is a blend that pays homage to the 1966 Bin 620, a legendary Penfold’s show wine from a great vintage. Crafted from the uniquely Australian Cabernet Sauvignon – Shiraz blend, this wine is considered to be the personification of the Penfold’s house style and worthy of a Special Bin status. The wine was bottled by Penfold’s Wines at Nuriootpa, South Australia in July 2009. The 2008 vintage was produced from the low yielding Coonawarra Blocks 5, 10 and 20 and is considered to be made in a very similar style to the famous 1966 vintage. The wine was barrel fermented in new French and America oak and is classically structured and considered worthy of extended cellar aging for several decades.

The wine has a wonderfully deep ruby garnet opaque core and is a blend of 51% Cabernet Sauvignon and 49% Shiraz. Rich, lifted and hedonistic, the nose is brimming with earthy black berry, freshly torn mint leaf, camphor leaves, wood spice, dried tree bark, cassis and black cherry kirsch liquor notes with nuances of milk chocolate, bruleed coffee beans and exotic botanical herbal spices. The palate is dense, creamy and unctuous but retains a certain poise and posture supported by gravelly mineral tannins, graphite spice, crème de cassis and a fine vein of palate refreshing acidity. The finish is super long and intense with just the faintest hints of cherry cola, salty liquorice, black berry confit and freshly baked raspberry crumble. The vinous adjectives and descriptives positively drip out of ones mouth with this complex offering. It is a big wine that walks a very neat, classical line and will impress most fine wine connoisseurs.

So how does this wine compare to some of South Africa’s finest? In wine terms, however delicious this wine is, it still  has the taste of a lot of sunshine on the fruit and the creamy unctuous glycerol mouthfeel is perhaps not as conducive to matching with food other than perhaps with meaty barbeques. This is a micro-cuvee of only 900 cases so merits attention to detail and probably a big price tag. But I would argue there are many equally impressive South African benchmark reds every bit as alluring and complex and which are much more classically proportioned and suitable for a true gourmands palate. As for the price, well, the mind boggles. R16,000 Rand can buy quite a lot of very fine wine.

As I questioned at the Cape Wine 2018 Old Vine Seminar, the problem with South Africa’s premium wine offering is not their quality and certainly not their styles but more the fact that the wines are more appreciated overseas than they are in the local home market. South Africa’s finest crown jewels are all being exported because the local market, unlike Australia, USA or New Zealand is not comfortable paying the prices that these fine wines inevitably will need to sell for. Locals shy away from buying wines over R250 Rand (£12.99) a bottle let alone R16,000 Rand a bottle. The result is a two speed market where all the best offerings are exported to an appreciative, thirsty European audience while the home market scrapes the barrel like a fishy bottom feeder in a muddy pond trying to find the last undiscovered bargains. This needs to change before we can set about bringing better profitability to the local wine industry. A healthy fine wine market inevitably has to be driven primarily by strong local demand… then the rest will follow… a la Penfold’s top cuvees.