Chateau Duhart Milon has long been overshadowed by its bigger Pauillac brothers Carruades de Lafite and Lafite Rothschild. But circa 2005, the tide began to turn and Duhart Milon started to command the prices of a proper top quality Pauillac Cru Classe. Much of this was certainly thanks to China’s love affair with the Rothschild brand Portfolio, but quality advancements at the estate were also clearly evident. 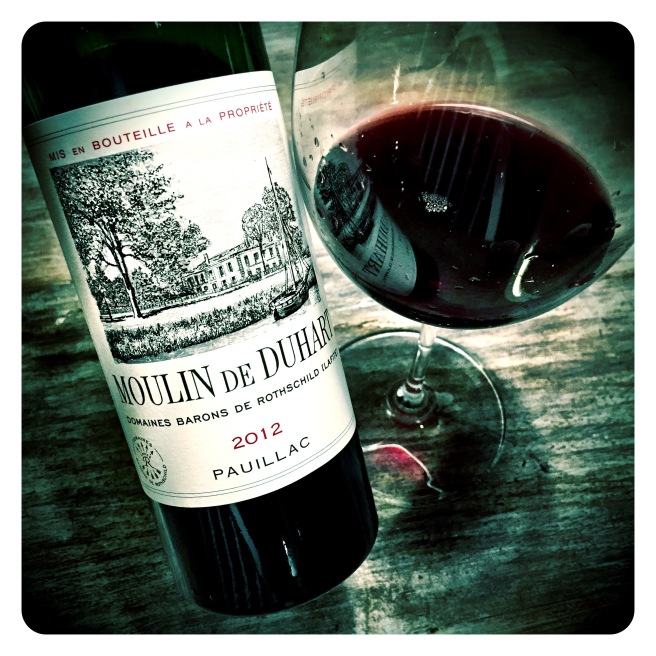 Château Duhart Milon’s second wine is selected on the same basis as the “Grand Vin”. In general, the grapes are from the younger plots in the vineyards and Moulin de Duhart has therefore several characteristics similar to the grand vin, but with less potential for ageing due to its shorter barrel ageing period, and as such, should be consumed younger than its more robust big brother. The origin of the name comes from the former presence of a windmill on the Carruades plateau, next to the Duhart-Milon vineyard.

The 2012 vintage was characterized by difficult weather conditions in the Bordeaux region. After a relatively mild winter, the spring was mostly wet and rainy, especially April, which brought a violent hail storm on the 24th. Such conditions hampered fertilization, leading to fears of reduced yields. Work in the vineyard was as vital as ever. June and July alternated heat and humidity. The weather became more stable from the beginning of August, enabling the grapes to finish ripening in good conditions.  Nevertheless, there was considerable variation in their degrees of ripeness and a great deal of sorting work was carried out by the Chateau’s teams from the end September.

The last bottle in the cellar is often the best bottle… such a delicious treat with an incredible meal at @chinatanglondon 😍🍷💥 #londonsbestchinese #tangtastic @elliotawin @mrcawine
The judges life… @decanter tasting 160 Pinotage reds from South Africa for the January edition. #finewinesafari 🍷
Iconic Kanonkop Wine Estate Prepares for the 2017 Cabernet Sauvignon Release… review now live on the #finewinesafari at www.gregsherwoodmw.com @kanonkopwineestate @seckfordagencies @stellenboschcabernet @stellwineroute “Deep, broody, exotic expression of Cabernet Sauvignon - all the deft elegance and finesse of the 2017 vintage - drink well on release and age deceptively well for 20+ years”
Tasting season at full tilt. Venturing to China Town for the superb @lescavesdepyrene tasting. #keepitnatural @pinotnoir70
With a sunset like this, it must signal the arrival of the holy @kenforrestervineyards on the hallowed banks of the Thames! @fmcwine @hightimberrestaurant
Thierry Germain magic! Another new release of his fabulous @domainede_grangeneuve reviewed on the #finewinesafari #cabernetfranc #loirevalley www.gregsherwoodmw.com
The crisis is temporarily over! New stocks of the incredible @naudewines Chenin Blanc 2016 have arrived and its drinking beautifully! Not far off the iconic 2013 in style and quality. Certainly one of South Africa’s greatest Chenin Blancs. #cheninblanc @cheninblancsa @oldvineproject @wosa_za @danreallylikeswine #unicornwine
Back on the sauce! #kingdomofcabernet @lerichewines @boutinotwines #lifeisacabernet @stellenboschcabernet @stellwineroute