The Tokara farm was bought by GT Ferreira in 1995 without a single vine on the property, initially with view to being a “gentleman’s residence.” But with such illustrious neighbours as Thelema and Rustenberg, it was always written in the stars that this prime property would be planted and established as a great wine producing estate in its own right. The Tokara winery has also had the exceptionally good fortune to have the same steady hand of Miles Mossop overseeing the wine production for the past 18 years, a factor that has almost certainly helped hasten the dawning of this new super premium wine Tokara Telos. Miles has since announced that 2018 will be his last vintage at Tokara as he leaves to pursue new winemaking projects. We all wish him the best.

I like to think that I have been a close long term observer of the ongoing progress at the Tokara winery, watching over almost two decades as the wines became finer and more accomplished with every subsequent vintage release. However, the Director’s Reserve white blend was undoubtedly the first wine to make international and local critics sit up and genuinely take serious notice of the potential of this winery. But for many years the reds somehow seemed to lag behind the fame of the whites until more recently, when some very smart red wines started to be bottled under the Director’s Reserve red blend label.

The Tokara Telos red blend maiden release can therefore be regarded as the coming of age moment for winery, its vines, and in many ways, the conclusion of a long held vision. Indeed Telos, for those not schooled in classical Greek, is a noun used to describe “the end term of a goal-directed process; especially, the Aristotelian final cause.” So is this the end? No, not at all… it is merely the end of the beginning!

The 2015 vintage saw the driest growing conditions and subsequently the earliest harvest at Tokara in many years. The main Cabernet Sauvignon portion of the wine was harvested on the 5th of March 2015 at 26 degrees balling, the Merlot on the 3rd of February at 24.6 degrees balling and the Malbec on the 24th of February at 24.4 degrees balling. It was one of the smallest crops on record and on average had harvest dates that were two weeks earlier than previous years. At harvest, grapes were placed in a cold room overnight and sorted twice on a Pellene Mechanical sorter and subsequent individual berry sorting on a vibrating table. After a four day cold maceration in tank, with 30% whole berry and 70% crushed berries, natural fermentation was allowed to proceed with wild yeasts. 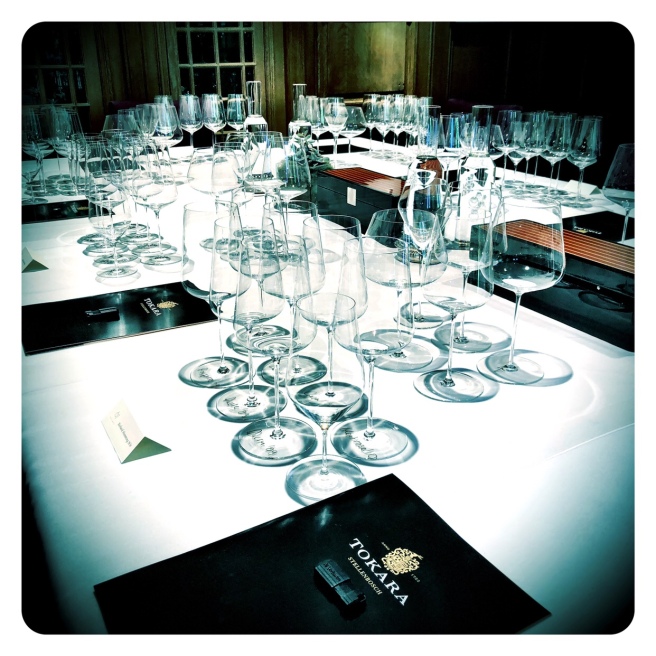 As has become all the rage with new premium releases in South Africa, the Tokara Telos 2015 was presented ‘sighted’ within an impressive flight of what can only be called ultra-premium Bordeaux reds all rated 100 points by Robert Parker on release. Hell, if you are going to go down the whole comparative benchmarking route, why not do it properly and present your wine alongside the best there is!? Needless to say, this approach needs more than a little confidence and self-belief to be effective. According to the owners, the Telos launch was held in London before South Africa as a nod of acknowledgment to a market that has been one of Tokara’s most supportive and receptive over the past years. A subsequent launch is planned for Johannesburg and then again at the winery in Cape Town.

A 17 year old single vineyard block making up a 1,000 bottle blend of 92% Cabernet Sauvignon, 5% Malbec and 3% Merlot, aged for 22 months in 63% new oak with medium toast and ‘house toast’. 2.1 g/l RS, 6.2 TA, 3.52pH. This young 2015 red blend displays an impressively perfumed nose with subtle potpourri and dried pink flower fragrance, violets and hints of lavender. Dusty graphite and gravelly minerality is tightly interwoven with attractive black berry, dusty bramble berry nuances and subtle fleshly cut hedgerow spice. The palate is sleek, lithe and particularly suave and fine boned with a very polished, sultry, light touch elegance and textural focus. There is already impressive complexity but also a modicum of classical restraint that seems to overtly shy away from elevated ripeness, oakiness or glossy sweet fruit characters. This is a rare South African expression that boasts a vibrant natural acidity and very ripe, fine grained powdery mineral tannins that cushion a beautifully natural sense of balance, harmony and finesse, all elements coming together seamlessly and effortlessly at such an early stage in the wines evolution. A really polished, faultless, old world leaning expression that is undoubtedly a new and impressive tour de force on the South African fine wine scene. Drink this wine from 2020+  onwards and cellar comfortably for over 20+ years.

Other Bordeaux Wines Tasted Alongside the Telos 2015:

An expectedly dense, dark, broody expression, that is quite reserved and closed. But it slowly offers up dark earthy black berry, bramble berry, and sweet graphite and cedar spice notes. An attractive sweet tobacco depth and spicy cassis opulence meanders to a finish with steely precision, incredible focus, monolithic structure and pristine depth. Very young but a profound wine nonetheless. One for the cellar!

A more opulent, generous nose with overt, ripe notes of molasses tinged black plum, earthy black berry confit and caramelised plums. The only wine in the flight with obvious sur maturite palate sweetness but almost pleasantly so, showing a more bold and riper side of right Bank Bordeaux. A wine with many merits and a delicious drinkability. Perhaps a little overblown for your classical connoisseur Claret drinker? 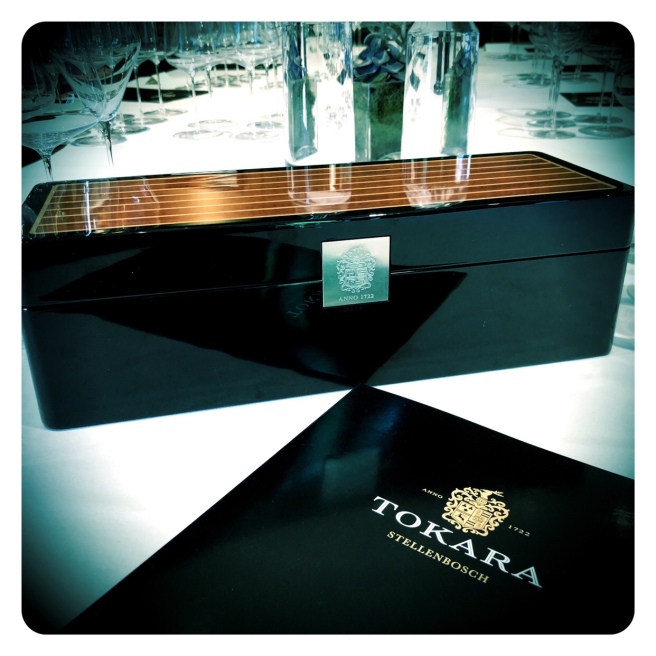 One thought on “The End of the Beginning – Tasting the Maiden Release Tokara Telos 2015 in London with Owner G.T.Ferreira…”

The fabulous new 2020 Chardonnay release from Hamilton Russell reviewed on the #finewinesafari - One of the most iconic wine brands in South Africa, quality just seems to get better and better every year. #walkerbay #hemelenaardevalley @olive_hamilton_russell @emulross @hermanuswines @wosa_za @wosa_usa
His and Hers individual portions of Beef Wellington. A nice treat for a Wednesday night. #primebeef #beefwellington #cabernetfranc
The new 2018 Clarets are causing a stir in the market and are showing a lot better in bottle than even at En-primeur time. Today I review the Chateau Tour Baladoz 2018, a neighbour of Chateau Tetre Roteboeuf on the St Emilion cote. Read the review on the #finewinesafari www.gregsherwoodmw.com @demour_wines @anthony_crameri @handfordwines
Happy Easter everyone! #finewinesunday @olive_hamilton_russell #chardonnay2020 #burghound #dafodilsunday @wosa_za @hemelenaardewines #newrelease #finewinesafari
I’ve been a sceptic of this wine from @anwilkavineyard over the years. Yes, a few hits in certain vintages but really mostly missing the bullseye. The 2015 turned a new page & this 2017 continues the change in direction. Plush, very creamy, supremely Bordeaux’esque. 95/100 GSMW @kleinconstantia @mattrobday #stellenbosch #cabernetisking #kindomofcabernet #finewinesafari
When I buy, sell or drink these great old historic bottles, I always think... If I kept these and cellared them further, they’ll be worth an absolute fortune! If they are real, they are rare!! 😘🔥🍷 @beychevelle1855 @nealmartin123 @handfordwines @bordeauxclublondon @bordeauxwinesuk
Fantastic tasting today with the great Matt Day from @kleinconstantia going through the 2020 releases. Wow! What a vintage! Some of the best savvy’s I’ve tasted from SA. Review coming on the #finewinesafari at www.gregsherwoodmw.com #constantia #sauvignonblanc
Jeanine and @MickCravenOz from @cravenwines are on to something v very special with their Firs Vineyard Syrah. The 2018 was fabulous, the 2019 is even better. The layers of savoury kirsch cherry, cured meats, hedgerow sapidity & fine granitic minerality are mesmerising. 95+/100 GSMW #finewinesafari